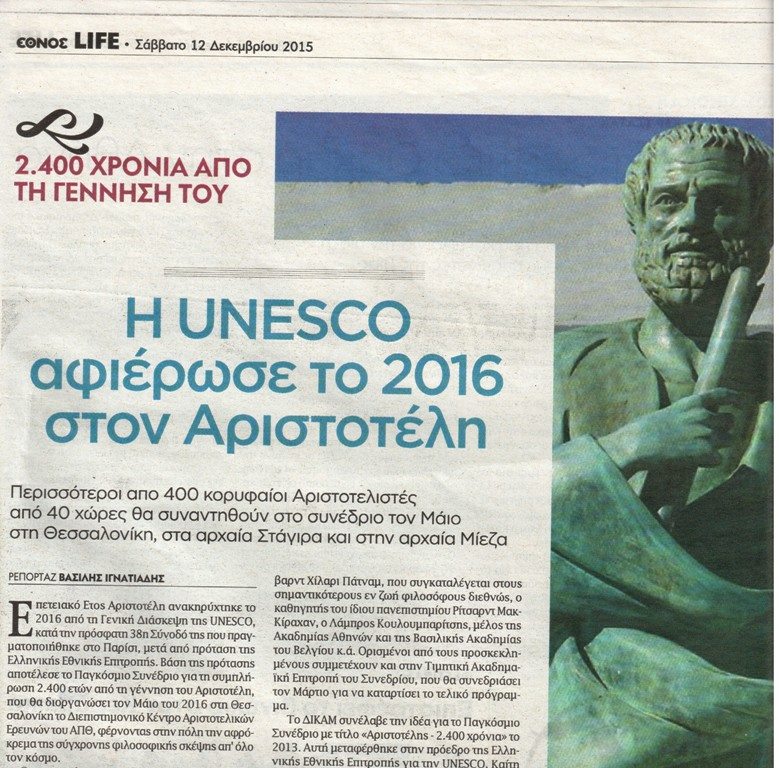 The procedure for the proclamation of 2016 as “Aristotle Anniversary Year” has been completed by the General Conference of UNESCO in Paris, in November 2015.

The original idea for the celebration of this great anniversary came to life back in 2013, when the “Interdisciplinary Centre for Aristotle Studies,” of the Aristotle University of Thessaloniki, took the initiative to organize a World Congress in May 2016 for the 2400 years since the birth of the great Macedonian philosopher and scientist.

The initiative of the “Interdisciplinary Centre for Aristotle Studies”, of AUTH, was warmly adopted by the Hellenic National Commission for UNESCO, who officially submitted to UNESCO, in January 2015, the proposal for the proclamation of 2016 as the “Aristotle Anniversary Year”.

“The proclamation of 2016 as the ‘Aristotle Anniversary Year’ by UNESCO honors the personality and the significant work of Aristotle; it also strengthens, in a most substantial way, the presuppositions for the organization of a Congress which is analogous to the importance of the Stageirite’s work; a work, whose impact is unique in volume of influence in the history of the human thought and which continues to be present in the intellectual evolution of Western civilization, after twenty four centuries” is mentioned by Professor Demetra Sfendoni-Mentzou, President of the “Interdisciplinary Centre for Aristotle Studies”, AUTH.

The Congress will be the high spot of all events to be organized worldwide in 2016 for the celebration of the “Aristotle Anniversary Year”.

The Congress is under the auspices of the President of the Hellenic Republic. It also has the support and cooperation of the Academy of Athens, of the Research Centre for Greek Philosophy of the Academy of Athens, of the International Federation of Philosophical Societies/Fédération Internationale des Sociétés de Philosophie, of the Hellenic National Commission for UNESCO, and of many other Educational Institutions of Greece.

The World Congress will take place at the Aristotle University of Thessaloniki, in ancient Stageira, the birthplace of Aristotle, and in ancient Mieza, the place where the Macedonian philosopher taught Alexander the Great.

Over 400 academics and scholars from 40 different countries have submitted their papers for presentation. Among the invited speakers, and members of the Honorary Academic Committee, are included the most prominent Aristotle scholars worldwide.